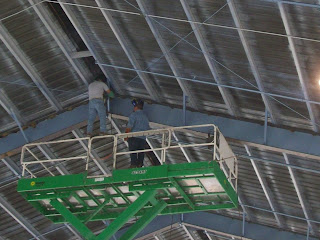 It is an oft heard statement as fact that steel erection is a dangerous business, accidents are inevitable and injuries unavoidable. Is this true?

In the late 19th century, 30 to 40 construction workers died building the Brooklyn Bridge. They didn’t even keep accurate records. Death was an accepted occupational hazard. Yet in the same decade, the Eiffel tower was built with just one death. Gustave Eiffel, with great concern for his crew, called for movable platforms to limit the distance a worker could potentially fall. This likely prevented numerous additional casualties.

In the 1930’s 14 men were killed building the Empire State Building. This was considered a momentous success, given the breakneck schedule and tremendous workforce engaged. Around the same time the Golden Gate Bridge was built on the West Coast. A safety net was employed saving 19 who would otherwise have fallen to their death. Even so, 11 men died in the course of that project and yet no outrage or call for reform was heard.

In 1971 OSHA was created. Its mission: to prevent work-related injuries, illnesses and deaths by issuing and enforcing standards for workplace safety and health. Yes, nearly 100 years after Eiffel’s efforts, the US Congress decided everyone should care as much for the safety of their workers.

In the mid 80’s, when I was a worker bee learning to erect metal buildings, we had no oversight whatsoever. We disregarded all forms of Personal Protective Equipment (PPE), in fact there was often little or no equipment of any kind on all but the most substantial projects. We were high flying daredevils with no caution, limitless energy, superhuman strength and no fear.

What a bunch of dumb*sses!

It wasn’t long after I became responsible for more than just my own self that I realized the daredevil of the past was a dinosaur and began to reconsider my own practices. By supplying and enforcing the use of all required PPE along with training, toolbox talks and rigorous documentation I raised the bar and increased the level of professionalism of all those involved in my projects.

Your dinosaurs will say, “all these regulations slow me down” or “I can’t go chasing after that nonsense when I should be hanging iron”.

I have found that a properly trained and equipped crew, using all the latest safety, hoist and access equipment, executing a well thought out plan, will do a better job and be more productive in every case. More importantly, I get the added benefit of peace of mind in confidence that I have done all that can be done to ensure each of my crewmen return home safely after every days work.

Wouldn’t Mr. Eiffel be proud of us?