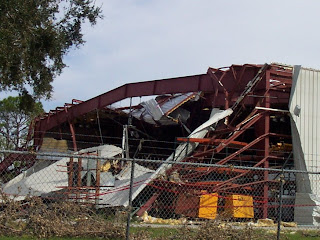 In the 80’s the metal building industry seemed to have a lock on the big warehouse box stores, distribution centers and such. Years of lax regulations and zero oversight, resulting in under-performing structures built by opportunistic shortsighted builders left a bad taste in the mouth of many of these end users. Tilt walls and structural decking began to cut into the traditional markets of prefab metal buildings.

In the 90’s we experienced significant hurricanes in Homestead, Pensacola, and Charleston, in Texas, Georgia and Alabama. Metal Buildings were strewn all about in the news footage, torn up and blown down. Prefab Metal Buildings took another big hit to their image. So what is the deal, do metal buildings suck?

You may have surmised that I would not agree with this position. In my experience, a properly designed and conscientiously built metal building should be far and away the most economical, longest lasting, most sound, and flexible solution for the majority of projects.

First, let me tell you what I believe went wrong. I saw first hand as these projects were left to ragtag erectors that flagrantly cut corners, they did not build to specifications, they often completely left out important components. Frequently I was witness to extensive damage over time as a result of a simple detail that was not installed as intended.

Before the erector had the chance to build it improperly, the builder often neglected to provide the most suitable design for the circumstance in the first place. I spent a few years in the early 90’s trying to repair/maintain huge metal roofs on UPS, Walmart and other such large buildings built before my time in the 70’s, 80’s and earlier. It was like my finger was in the hole in the dike and it was a bit embarrassing to be so ineffective. I had consultations with several manufacturers. It wasn’t just me, they were experiencing the same all over. Soon, numerous design changes came about addressing the failures and shortcomings.

Then came the hurricanes.

Initially, the buildings in place were just not designed for the magnitude of the events we experienced. Hurricane Andrew had gusts nearly twice the design required by code. It wasn’t just metal buildings that failed. The twisted remnants of the expansive steel structures did, however, make for better TV.

Another round of catch up ensued as manufacturers stepped up with a host of design changes. Codes became more stringent and testing requirements were put in place. I saw first hand again many of the newest innovations and improvements. I also saw as others tried to “beat the codes” with shortcuts and cost savings to win bids.

In 2004 and 2005 we experienced 8 hurricanes in South Florida, the most active period ever. Now I saw the culmination of the last ten years evolution of the industry. I personally surveyed and contracted to repair numerous damaged structures after those events. Consistently I found that the most vulnerable structures were either built prior to code changes or were not built to the appropriate standards in spite of all that had been learned.

The failed structures were made inferior by shortcuts in design, improper installation or both.

I might add that not a single project of mine was significantly damaged through that period other than where they were impacted by debris from adjacent building failures.